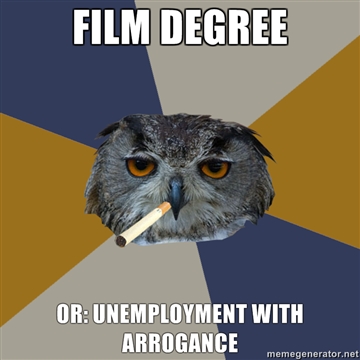 As a film major in college, I rarely think about what my future could be like, as far as finding a job later. The concept of “finding a job” really doesn’t appeal to me much, since I figure I’d rather create something than create somebody else’s stuff. Bottom line though, is that I’m going to have to suck it up, and just do it. What I wasn’t really thinking about, until recently, was that my degree (when I finally get it) won’t just be a film degree. It’s not going to just be a bachelors of film. Instead, I need to think about it, as a “Bachelors of Science in the School of Communications.” That makes it sound much better. It isn’t just playing with words either, this is reality. A degree from the GVSU School of Communications will actually be quite beneficial later, and combining that with my Business Minor will actually do great things as well. I’ll have opportunities for employment in a vast and wide-spread group of areas that I hadn’t really thought of before. Perhaps when I said that school was a waste of my time… I spoke too quickly. Perhaps I should have, instead, thought outside the box a little bit, and realized that no matter what happens… I’ll most likely be okay.   I think, what really gets people through their days in the end is the thoughts of what “could” happen. Possibilities have a way of lighting up the darkness of our thoughts, and actually can inspire people to proceed on their current path, producing far greater wonders for the world to see later. Of course, I’m talking about artsy people there.]]>