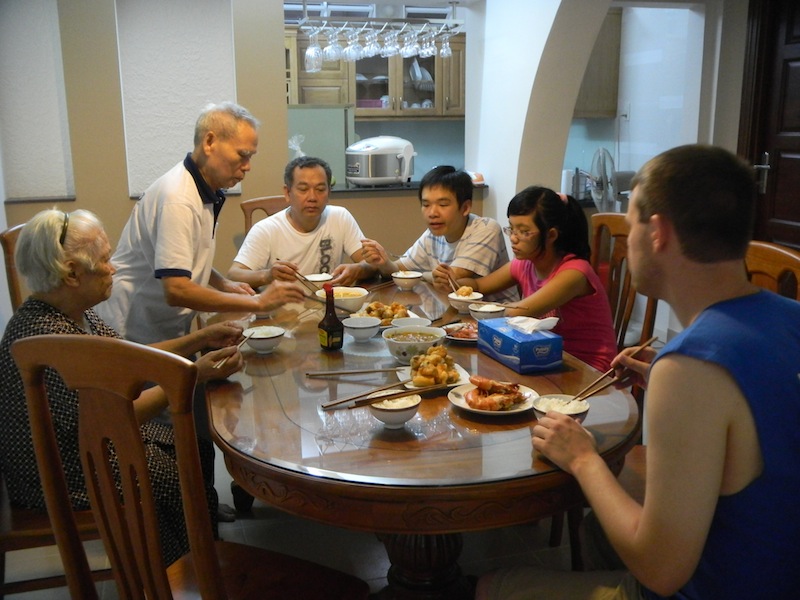 Today was great because I got to spend a lot of time with her family. We traveled to their Rubber Tree farm, and learned all about that aspect of her father’s life, and we also spent a large portion of the day traveling through the city, and navigating through the crazy traffic they have here.

I really appreciate Hang’s family and their attempts to make me feel as welcome as possible. Every chance I get, I attempt to learn a little bit of their language, and while a few words every day is likely small progress, I do feel as though they are having fun listening to me try. I don’t feel as though they are making fun, I feel welcome. It’s cool. Hang’s father seems like somebody I could relate to, if I could talk to him without the need for translation. He reminds me of somebody who has worked hard his whole life, so that he could work easier in his later life. A man who has done everything he can to build himself up, so that his accomplishments could work for him later on. With his day job, and his rubber tree business on the side, he has certainly made a success out of himself. You don’t have to know Vietnamese to see that. The home they live in is beautiful. It’s an average-sized family home for American standards, but here in Vietnam… It’s huge, and very high class. One difference that I noticed right away is the lack of carpeting. In this country, carpet is a bad deal. It makes things warmer, and it’s harder to clean. Homes here have hard flooring, mostly tile. It keeps things cooler, and is obviously much simpler to clean. The ceilings of the home are quite high as well. It’s an old French castle (the style is) so a few of the features are quite distinct for that style home. Now, everything was completely remodeled (partially because I was coming), so it’s even more beautiful than it was a few months ago. It’s so strange being here, and attempting to cope with the language barrier. I was used to having it the other way around, with Hang’s mother in the United States before. I couldn’t understand her very well, but I felt comfortable because it was my country, in an area I knew, and people I could relate to all around me. Here is the complete opposite. I’m the outsider, and I regularly get looks from people on the street when I walk with Hang. You can easily tell that they are surprised to see me in such a place. They mostly aren’t used to seeing tourists around like I am. Tourists don’t come to some of the places I’ve been going. I’m traveling with people who have lived here their whole lives, and aren’t used to seeing a small town white dude from Michigan hanging around, much less living with a wealthy family down the road from them. Still, they don’t really freak me out too much, and they keep to themselves with everything except their eyes, so I’m cool with it. I actually expected to get a lot of looks anyways]]>
familyHangvacationVietnam