The Dude with a Xích lô

the city. You can brave the traffic, and go by car or motorbike, or call a taxi to get where you are going, and let somebody else tough it out. Another way, which is primarily used by tourists only, is via xích lô. A Xích lô (pronounced “sick lo”) is a three-wheeled vehicle with a seat in the front. The driver sits behind the seat, and pedals the vehicle forward just like your average pedal bike. It takes a bit of strength to push the xích lô forward when it has a person riding in it, and even more for two. Transportation via xích lô is actually quite expensive, because these drivers seek out tourists who have money to blow, and don’t really realize how cheap stuff is supposed to be. Like the street vendors, they price gauge the crap out of foreigners. Even when Hang is with me, this guy was determined to get an hour-long tour out of us for $12. I’m pretty sure this is too much, and we really don’t want the hour-long tour anyways. Hang just wants me to experience riding in a xích lô, so I suppose an alternative plan, for a shorter ride. For 15 minutes, He says 80,000d ($4), I tell him 50,000d ($2.50). He agrees promptly, and we walk over to his ride. The experience of riding in one of these things isn’t really much more exciting than you’d think. It’s a slow ride through the city, in a chair. It’s a relaxing ride though, unless you get stuck behind a bunch of freaking motorbikes… then it’s exhaust pipes all around you, which sucks. The ride was worth the money though, because it was just Hang and I riding around town, with her on my lap (there is only one seat after all). When our fifteen minutes were up, we directed him to stop and let us off at our next place of interest: Independence Palace, the home of some of Vietnam’s previous presidents and leaders (which has been turned into a tourist area with guided walkthroughs and lessons of the country’s history. More about Independence Palace coming soon… 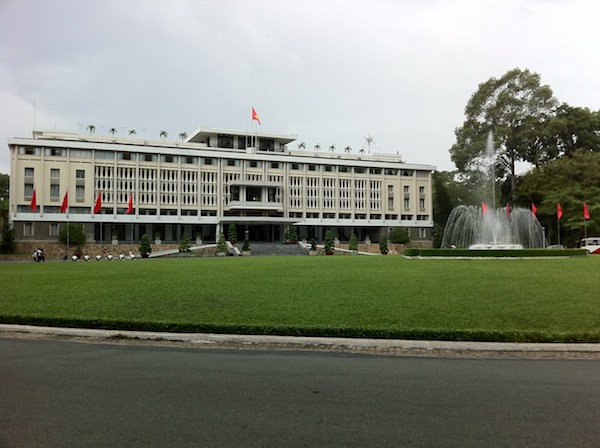