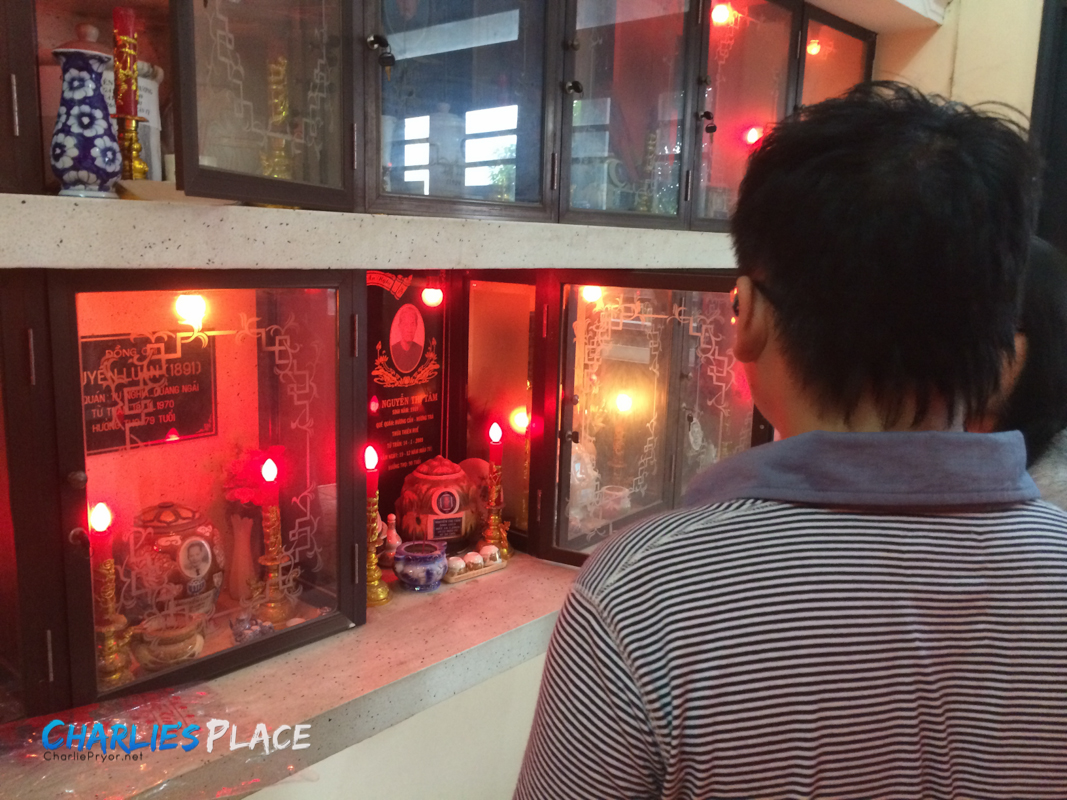 the traffic. Gradually though, we got away from the busy city, and out near the edge of town. The cemetery was surrounded by a tall concrete wall, I’m assuming to prevent people from climbing in an disturbing the place with garbage, noise, or worse… theft. [gallery type="rectangular" link="file" ids="3835,3837,3838,3836,3848"] We pull up to the gate, and drive around to the front of a large building. The parking lot is completely empty here aside from a terribly placed volleyball net, which was stretched almost completely across the width of the lot (making it a bit inconvenient to navigate around it for parking). I’m told the net is there to allow those who are tending to the grounds to get a bit of exercise every now and then if they want. Seems there would be more logical ways to configure activities for people… Something that didn’t get directly in the way of visitors. Along the outside of the premises are very large above ground tombs. It doesn’t appear as though they are actually buried underground here. All gravesites appear to be above ground. The graves near the front of the area (just after the gate) are reserved for “high ranking government officials,” and can be seen as very large and highly decorated sites. Hang’s grandfather is not outside, and is instead inside the building, since he was cremated. [gallery type="rectangular" link="file" ids="3839,3840,3846"] We walk up the building, where a statue of Ho Chi Minh’s face can be seen in the large main room. This is a place where everyone can come and pay their respects to the “father of Vietnam.” Over to the right of this, a flight of stairs, which we climbed until reaching an upper floor where Hang’s grandfather is. The walkway wraps around the building with various doors leading to different holding rooms. I don’t know if they are actually called holding rooms, but the rooms do hold the cremated remains for hundreds if not thousands of people, as well as the various gifts that are associated with them. One rule that is consistent here from the United States, are flowers. In Vietnam, flowers are always brought to the sites when you visit, and there are even people selling flowers near the cemetery when you enter, in case you don’t have any already (a good spot to sell flowers I guess, since we bought some). With flowers in hand, we finally walked up to the small room where the remains of Hang’s grandfather set. [gallery type="rectangular" link="file" ids="3841,3843,3842,3844"] Urns are within these shelves/shrines of every room, along with a small statue at the front. People pay respects by offering flowers, and there are tea cups and other dishes that are kept within the small shrines as well. The urns sometimes are accompanied by other relatives, such as a husband and wife, as shown in a later photo. Each time you visit, you clean the dishes using a sink just outside the room, to keep them from collecting too much dust. There are fake candles illuminating the room with red light, with spare bulbs in various locations around the room in case any of the candles go out at your relative’s resting place. [gallery type="rectangular" link="file" ids="3845,3847,3850,3851,3852"] With the candles in good working order, and the dishes cleaned, any gifts that were brought are laid in front, and then incense are lit as words of respect or memory are spoken by all who visit. This is usually the hardest part for loving family who visit, as it’s the part of the visit where words are spoken for your loved ones, and tears can sometimes be shed. The incense is held in front of the body, and maybe high near the head, as words are either spoken aloud or in private within yourself. Then, the person will bow three times with the incense, and place the still burning stick into a small pot in the front of the site, where it will remain burning until it burns out naturally. As you can imagine, the entire room has a faint scent of incense most of the time, especially if the room has had recent visitors. [charliead] When all was finished, a final set of bows are made to say goodbye, and we all exited the room. The same process was done for Hang’s great-grandparents as well, which is a site featuring multiple urns instead of just a single. I’m told by Hang that within the first 49 days, loved ones are visited once per week (7 days in a week, for 7 weeks. Seven is one of many lucky numbers). Then, at the 100 day mark, they are also visited again, as well as on any special occasion, such as the new year, holidays, their birthday, or an anniversary day of their passing. In this case, Hang and I’s visit was the special occasion, and it was wonderful to see this stark contrast to american cemeteries, as well as pay my respect to my wife’s grandfather.]]>

A Message To All Of You Who Love and Hate On the Coca Cola Superbowl Ad: "America Is Beautiful"