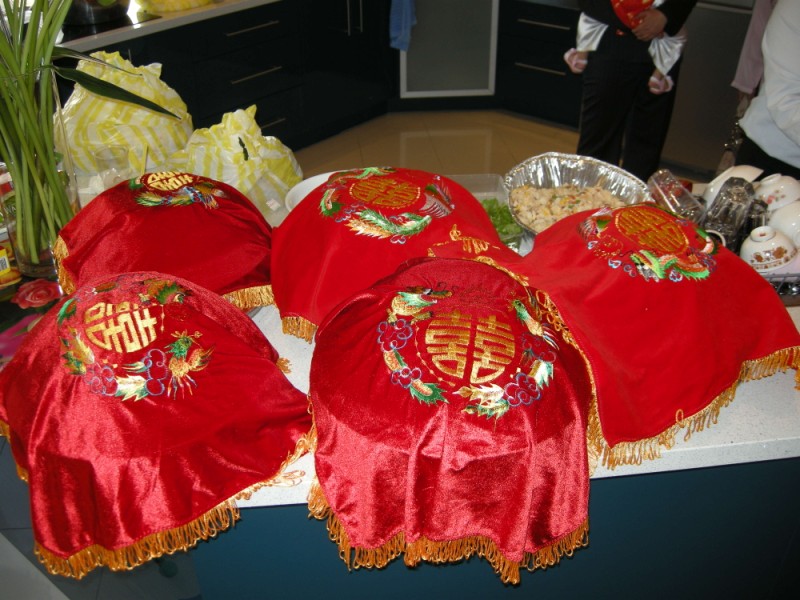 Marriage, it seems, is a much bigger deal here in Vietnam than it is in the States. There are many ceremonies, rather than just the one in a church. Family also plays a much bigger role, and the homes of both families are used every time. The Vietnamese marriage ceremony is quite a bit different from America.

I visited Hang’s cousins yesterday, where I was shown wedding photos and a very long video showing the entire ceremony (it was wwwaaaayyyy longer than it should have been, at least the video was anyways). The two that are to be wed, along with their families, start at one house, and have a bunch of traditional stuff happen. I don’t know the purpose of most of it, but there are a lot of boxes, which are stuffed with food by the males, and then passed around to the females as the family walks between the two lines. Everyone is always in a line. There were lines formed to get into cars, lines to get into the house, lines to eat, lines to sit at a table. There were lines formed before anything happens it seems. Then people eat, and once all this is done, and some speeches are given, the empty boxes which used to contain food, are then passed from the female side (while they are once again in a line), back to the males, as everyone once again walks in a line through these two groups. After this, they line up and get into cars, then drive to another place for yet another party. They eat and drink here as well. Everyone is dressed “in their Sunday best” as we would call it, and the entire event takes the whole day, morning til night… Oh, and the last little bit I forgot to tell you… this isn’t the wedding. It’s the ENGADGEMENT! – This entire deal is done to make their engagement official! Craziness. Hang’s cousin has been working for an international company for a while, so his English was actually quite good. By talking to him, it sounds like, deep down, he thinks the huge amount of effort that goes into the engagement party was overkill as well. Most guys feel the same way I think. Weddings in general are always for the girl anyways. We men really don’t care much for it, which is why most of the effort of planning such things is handled by the woman usually, so that it can be just right for her. The other part, which actually gets me a bit worried, is how everything is paid for at Weddings. Looks like the man’s parents pay for everything for the engagement party, as well as the wedding ceremony (and anything else the people here do). Immediate family of the couple is also expected to bring the equivalent of $1,000 each to give to the couple to start them off on their new life together. The bride’s family pays only one thing… they give the girl away. #whatacrock Overall I probably did a terrible job of describing the wedding processes (or engagement process), but just know that there are a ton of extra things that are done, a huge deal is made out of the engagement, and then after about a month, the wedding ceremony happens, which is around 3-4 times as large as the engagement. Honestly… it’s overkill, and I personally wouldn’t want that. Still, like I said earlier, all this stuff is for the girl anyways. I really hope, should the situation occur, these people don’t plan on having my parents pay for everything, because it’s really not going to work well that way. [charliead]]]>
partytraditionVietnamwedding