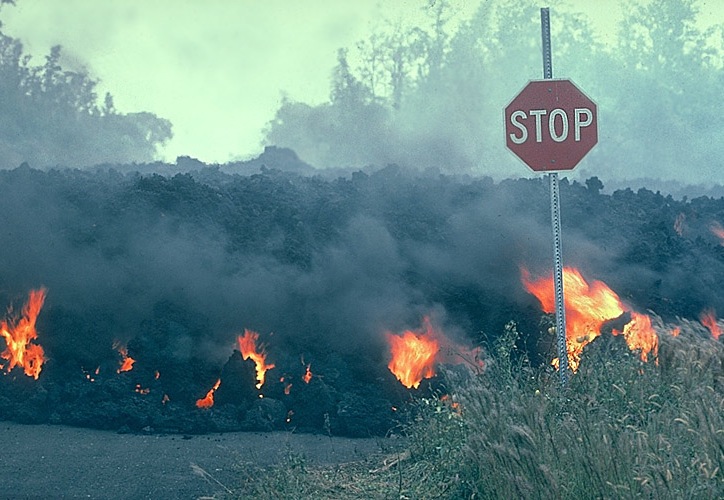 Lava like in Volcano: www.youtube.com/watch?v=nWGM46rLckU In the scene, we see a slow and painful death, ultimately with the screaming ending when the man melts to be roughly chest-high. While this may work better for dramatic effect, it’s very far from how things would actually go down. You see, our bodies are mostly water-based (about 75%). What happens to water when it gets heated up? It turns to steam. But what happens to water-based organic material (which is what you are) when it’s super-heated at a very fast rate, like what would happen when falling into lava? Well, as it turns out. The results are actually far more explosive in nature. www.youtube.com/watch?v=kq7DDk8eLs8 The video above features the incineration of waste in Erta Ale Volcanoes lava lake.  This is teh description of the video:

It is frequently discussed whether it is possible to sink in lava. Due to its high density, a person would generally be expected to remain on the surface. Indeed it is possible to briefly walk on certain types of lava if professional heat-protective clothing is worn (do not try yourself). However, the video shows that falling from a height, a person would be able to penetrate the crust of the lake and submerge in it. The test was performed with a box of camp waste (largely food rests) in a bin bag. Estimated weight 30kg, Size 60x60x60cm. Fall height, about 80m. The lake reacts with violent lava fountaining activity, presumably in part due to steam produced from the organic matter. The lava lake at Erta Ale has persisted for many years and contains relatively fluid basaltic lava. Only few volcanoes have such lakes.

As you can see, the effects of organic matter falling into lake of lava is really far different than in Volcano. It’s super fast, explosive, and there is a lot of fire. Of course, this effect wouldn’t serve the purpose of the movie, since the man on the train needs to save that passenger. In reality, the man would have nearly exploded, bust into flames, and instantly dropped the other man into the lava as well (who would have exploded into flames the very same way). That’s a really awesome effect, visually, but there is far less character drama that way. [charliead]]]>
deatheffectsfiremoviessciencevolcano